Cruising into week three of this adventure in art history, it started with the ancient art and included Greece, Rome and other topics that weren’t not discussed but mentioned such as Egypt, Agean, and Etrucsan.  Surely the art that was created in this time period has effected how this classical art influences modern art.  The connection between art and science was interesting, and I found myself taking a minute thinking, that if there wasn’t anyone asking the questions, then there would be no answers.  Also the fact that technology today is practically killing the earth made me move my phone just a little bit further away from my desk, lol ( I just want my phone). Also the two sculptures were interesting to think about how the progression of art goes or could possibly go  from primitive to more life like features.  i loved when the lecture talked about the philosophers such as Aristophanes, because I am also taking a comic spirit class online this semester, it was great to think about how the plays of this era would have been done with this type of art around them.   In our Google Hangout my group, due to technical difficulties had a rough time getting the video clear so decided to text instead and shared some great and interesting thoughts.  For instance we talked about how values played a critical role in the way art was created in this era, and how older art has a sense of beauty that we sometimes lack with today’s modern approach to living, and also depends on a value system. 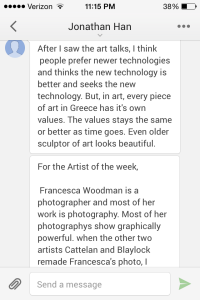 Moving into Rome and learning a quick history about this atmosphere was awesome and interesting!  I couldn’t believe how large the Column of Trajan was and how intricate the carvings were.  The Roman topography and how it became a staple in modern art, logos and even movie posters! who would have thought that Trajan would be making an appearance in Titanic!!  The influence of Roman art transferred through history and is still appreciated today… which also lead to our artist of the week and how other artist can be influenced to create similar pieces of art like how Carol Twombly used Trajan topography in modern art.

Like I stated before about how artist can be copy cats of each other.  I have no idea how to spell the two other artists that created other art pieces after woodman, but i liked to see how those other artists perceived and remixed her art piece of the girl hanging off the door.  I would have never guessed how keeping the art piece in its packing case would create a whole new dimension, and feel to the piece!  In the hangout we talked about how one person can’t be the judge of which art piece is better, like the old saying “beauty is in the eye of the beholder”. Also i loved the quote that Banksy took from Picasso and made it his own by crossing out Picasso’s name was genius! 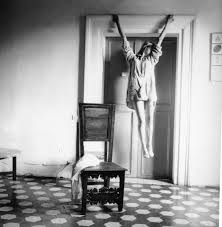 All in all this week was awesome and i cant wait for next week!

Go check out my “About Me” page and watch my video!!

One thought on “Greece, Rome, & Woodman”